In this article I will take a look at the history of the Fed interest rates, how they were established and how these interest rates supported the debt reduction.

After that I take the new information to make a forecast and discuss possible developments and strategies to gain from this new knowledge.

In the actual situation nearly all developed countries have a high debt to GDP ratio (GDP = Gross domestic product). In the table you can see the leader of world:

You can find  another beautiful depiction at the economist and their world debt clock.

Since the last financial crisis in 2008 the national debt has risen in most developed countries all over the world and comes to its limit. Examples are Greece, which has several discussions with the IMF (International Money Fund), ECB and European Union, the default in Cyprus, the problems in Ireland and Iceland or in Puerto Rico, just to name a few.
The stats shows, that at the rate of 90% debt to GDP the countries start to struggle, some earlier, a few later, for example Japan. But it is well known, that Japan has a lot of problems with his economy and tries different options to reduce debt and return to economic growth.

This raises the question, what are the sources of government income?

That is it. But as you know, that taxable income is not enough. Therefore the government borrows some money, which is called debt. The equations look like this in the first and second year :

As you can see, this is very uncomfortable, because you gain some money in the first year, but in the second year, you have to pay the interest and you have to pay back the debt. Both reduce your financial freedom. If you don’t invest your debt in the first year, you will have a problem in the second year. The government “solves” this problem as it borrows money in the next year again in order to pay the interest and the debt. Clever! But you see, this will not work until infinity and even the government come to the point at which it has to reduce the debt. The question is: How?

Debt can be reduced by different ways:

Economic growth is the most pleasant way to reduce debt, because the government gets automatically more tax income which can be used to reduce the debt.

The second solution, substancial fiscal adjustments and / or austerity plans are a lot harder to achieve. In this case someone gets less money or obtains less contracts or someone has to pay more tax. It is very difficult to carry out these reforms and everyone argues, that it will not work and instead the government should spend more money, which is easier but not the aim.

The third solution, explicit default or restructuring of public debt is far more serious. Some people lend the government their money and now they don’t get anything, no interest and also the money is gone! These people will not vote you anymore! Therefore this option is hardly valid in a democracy.

The fourth option normally goes in hand with a high supply of money, which is issued by the central bank. Most advanced countries have more or less independent central banks, which try to avoid such a sudden increase in inflation, because it’s ruining the trust in the money. This means, that the people don´t accept the money anymore and trade with other exchanges, as other currencies, gold, silver, cigarettes and so on.

The fifth solution, a steady dose of financial repression is less known, but can be very effective and has been used by numerous countries in the past. Because it is less known but effective, I want to explain it a little more.

A steady dosage of financial repression

What are these financial repressions?

You can classify 3 branches:

All these methods were more or less used by the developed countries after World War II until the end  of the Bretton Woods System approximately 1974-1975. The Bretton Woods System of fix exchange rates combined with exchange controls made it hard for savers to transfer their money to other countries with more favourable conditions. The first method was used in the United States as I mentioned above by the Regulation Q. In Germany, for example, public debt was declared as an investment vehicle without any risk and was therefore the preferred asset by banks and investors. I mean, it is really funny because in 20. June 1948 Germany had a monetary reform and the old public debt was worthless and a few years later it is an asset without any risk! So, be aware, who tells you that.

Before World War II the countries faced the great depression and tried to solve the problem with an increase in public demand, for example, in the United States the building of the Hoover Dam or other infrastructure projects. This went together with an increase in public debt. The second World War cost a lot of public money and the national debt of the countries increased again. For example the debt per GDP ratio in the United States was around 116% after World War II. 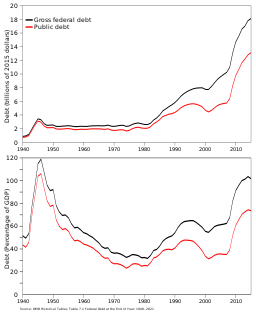 By the above mentioned methods most of the developed countries were able to reduce their debt per GDP ratio significantly. On the other hand, most parts of Europa were destroyed and needed a rebuilding in contrast to today. This demand leads into economic growth, which also helped to reduce the public debt.

In the part above, I showed you different methods of financial repression and that these methods supported the reduction of debt.

In this part I want to present you, how these methods effected the real interest rates. An extended version of this description you can find in an working paper from the National Bureau of Economic Research by Carmen M. Reinhart and M. Belen Sbrancia, who showed, how the real interest rates in advanced and emerging markets behaved in a situation of a steady dosage of financial repression and without it.

In this picture you can see the real interest deposit rate frequency distribution in the United Kingdom from 1880 until 2010.

The picture shows, that in the time of financial repression the real interest rate was much lower then in the other time frames. This leads to the assumption, that without financial repression the real interest rate would have been much higher, may be like the green line or even more, because a lot of capital was needed at this time, because reconstruction after the World War II and an increasing population.

Reinhard and Sbrancia estimate that the liquidation effect of the public debt in the United States and United Kingdom was approximately 3 – 4% of GDP per year. This is a huge amount and it delivers compounding returns.

What does this mean?

This tells us, that the government was very successful to reduce their debt by a steady dose of financial repression. On the other hand, in this time savers lost a lot of their money, because the real interest rate was negative. Additional they had to pay tax on their interest income! This way every saver paid twice and the government earned twice. They got more tax revenue and paid less interest on their debt (see equation above).

What can we adopt for the future?

The table in the beginning shows, that today many countries face a critical debt to GDP ratio, which can destroy the actual order. Therefore they are looking for alternatives, how to reduce this ratio.

This is the easiest way, but at the moment it is really difficult for the countries to achieve it. In most of the advanced countries the growth rate declined over the last years. The war damage is already removed. The other growth motor is a increasing population, but this is also missing in these countries.

Every time when it comes to a discussion about the national budget, you can see how every party tries to grow the piece for their party and supporter but no one want to spend less. Structual reforms seem to be necessary, but nobody wants to fight for them, because they are unpopular. Look at the discussions in the United States or in the European countries.
In my opinion, it is crucial, what is taxed. In general, you can tax the source of income, as dividends, interest, income or the use of money, which is consumption. To tax the consumption is far better than the income because a income tax will lead to distortion in the source of income, which leads to surplus and lack in the production, which affects the whole country. The decision about consumption is at the end of the chain and delivers suppliers information about the needs. The supplier can decide without distortion, if they want to increase or decrease their supply.

Explicit defaults or restructuring of public debt and a sudden surprise burst in inflation is no alternative in a democracy which leads to the last possibility:

A steady dosage of financial repression

This is a very smart solution for the government, because it avoids the disadvantages of the above mentioned methods and nevertheless delivers very good results. But today we have no fix exchange rates combined with exchange controls which allows a simple introduction of this method. But we see the distortion of public debt at the expense of private debt by the European Central Bank, which accepts a government bond with a C rating as a “good” security in exchange for money. Also the capital adequacy requirements for public debt are far easier than for private debt.

But also keep in mind that very extreme regulations have already occurred today. For example, during the Cyprus Crisis the European Union installed exchange controls which stopped every exchange with Cyprus. Furthermore they reduced the paying out at the ATM to 40 Euro per day and person! Similar things happened in the crisis in Greece. And I think that they will act similarly in the next crisis.

This leads us to the conclusion, that it will be very likely that the interest rates will be low and savers will lose their money. Therefore we should invest our money and eventually should leverage our investment with some debt. But we should also keep in mind, that there is a huge difference between public debt and private debt. Nevertheless low / negative real interest rate favour debtors and punish savers.

In general, low interest rates favour equities, as we can see at the long bull market over the last years. This could be another investment, although the equity market becomes more volatile in the recent time. That means, that you can wait for a good entrance point, but on the other hand, you have to resist a more volatile market.

Another point is your personal long term perspective:
Let’s assume, that you plan to retire abroad. In this case you should consider investing some money abroad already today, for example in an apartment, which you can let, because it might be too late to do this in the future on the basis of capital controls, which prohibit to move your money outside your country.
But the opposite is also true: If you plan to retire in your country, you should consider, that you might not be able to send back your money, because the foreign country does not allow it. So, choose wisely, depending on your personal preferences.

Let me know, what you think.